A summary of our day trip yesterday was A LOT of walking with a bit of site seeing. According to Apple’s latest health/lifestyle app we walked over 30,000 steps and around 15 miles. Our feet were killing us by the time we got on the train home.

We left Florence at 8:30AM and took a train to Pisa. The train was a lot nicer than I expected. It probably was new. Of course the one iconic thing we wanted to see was the leaning tower. The map at the train station was so worn down where the tower was located that you just had to assume where it was since everyone had touched it. We were able to buy tickets to climb up to the top of the tower. It was interesting to see that all of the stairs had gradually become indented where people would step. The view from the top was absolutely gorgeous. You could see the entire town and the alps in the distance. We sat up there and enjoyed the view for at least 20 minutes. 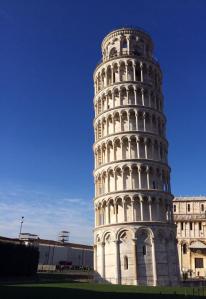 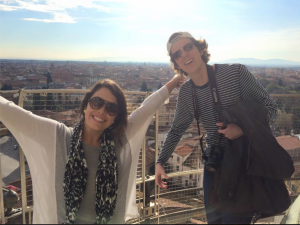 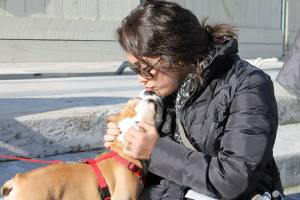 This was a highlight of my day! I got puppy kisses from the cutest bulldog puppy.

After walking around Pisa, we realized there was no way we could spend an entire 12 hours there so we hoped on a train to another nearby city. When we got to Lucca we didn’t really know what to expect. A teacher had told us we needed to check it out and that there were all kinds of beautiful gardens…we didn’t see any of those gardens. It might be because we went in the middle of winter but who knows. We walked right into a place to go ice skating in the middle of a plaza. You could tell it was all locals skating around and we were the only Americans. The man working just gave us random skates and mine were at least 4 sizes too big so that made skating even more difficult. We kind of were in it just for the pictures and to say we went ice skating in the middle of a piazza in Italy but skating around turned out to be pretty fun too. Thankfully none of us fell! I didn’t manage to snap a picture of it but I also had the best gelato in Lucca. It was white chocolate flavored. There were little shavings of white chocolate throughout the entire thing. I’m hoping I can find something like it here in Florence because it was delicious!