I thought the next time I would post would be after my trip tomorrow to Pisa. However, our culture field trip this morning was really cool and I took a lot of pictures so I figured I would share now. I mastered all of my kindergarten level Italian for my quiz in 30 minutes so I’m writing this really quick before I leave.

We first went to a mosaic studio. One of the men working in there said it was his family’s business and he had been doing this form of art since he was really young. It was amazing walking around to see how intricate all of the final pictures were. We all were so fascinated watching them spend days perfecting the tiniest pieces. They said that most of the pictures take months and sometimes years to finish.

She rubbed a cloth over this and the colors came to life. This has taken her a couple of months. All of the black windows were carved individually but the blue was from the same slab of marble.

This was the back of her piece. You can see remnants of glue and the stuff they have added to reinforce the back. 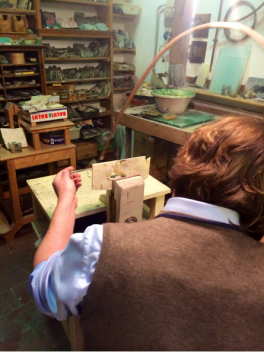 This is the technique they used to carve out the specific shape and color for their picture. She said a small piece could take anywhere from 10 minutes to an hour. 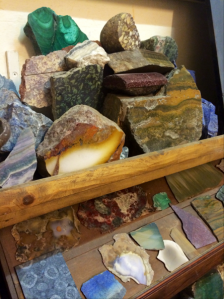 There were pieces of stones from all over the world on all of the walls in their workshop. 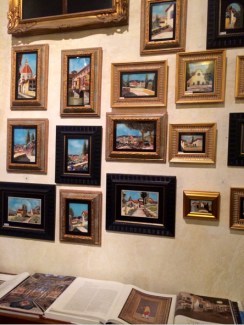 They had so many beautiful landscape pictures all over the walls in the showroom. 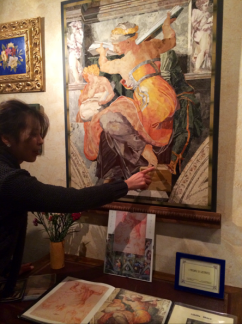 This is a replica of a small part in a huge mosaic in the Sistine Chapel. The lady in the picture said her husband did it and it took him 3 years! This picture doesn’t even do his work any justice.

We all had no idea how much one of these mosaics would cost. I knew paintings were expensive but I would have never guessed hat this, smaller than an 8X11 piece of paper, would cost $20,000!! It was pretty but not that pretty.

We then went to a school that taught how to make everything you could ever imagine in leather. They told us all about the school’s history and then gave us a demonstration on how they stamped gold designs on the leather. He put all of his tools in a fire to heat up while he got very thin sheets of gold and brushed them on the piece of leather. I’m pretty sure it was just a scrap piece of leather that was cut into a circle. He then used different stamps on top of the gold. As he brushed the gold sheets away, we could see the design he created. I thought it was really cool and would make a great souvenir so I asked my new friend Francesco if I could keep it once everyone passed it around. I was afraid someone else would beat me to it but thankfully no one did. We went into the gift shop and saw similar things to the one I was now holding in my hand. That was when the rest of my group realized and were a little irritated or jealous that I got to keep it. The purses they made were so original and unique. They told us that they only make one bag a day so no two bags are exactly alike. After I scour Europe to find the perfect 21st birthday present for myself, I may be back to purchase one of my own. 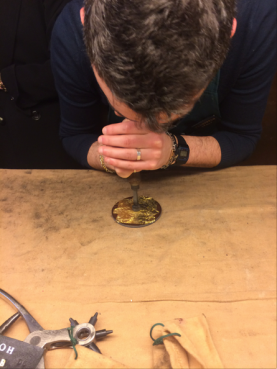 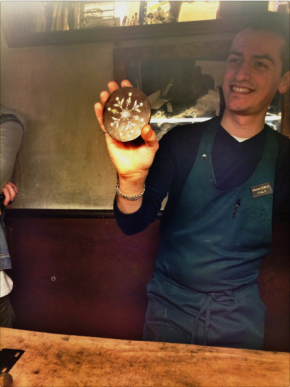